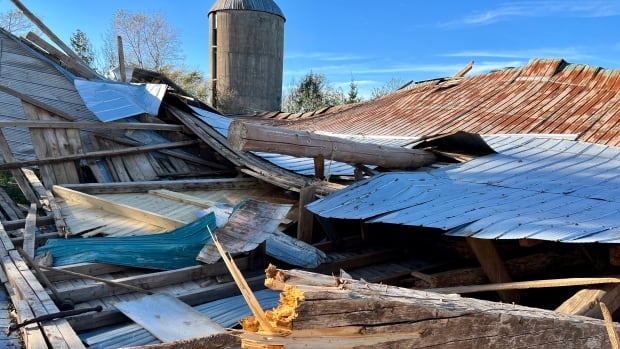 The powerful storm swept through the province on September 24, knocking out power to more than 400,000 Nova Scotia Power customers.

The Red Cross opened a temporary office in Pictou, NS on Friday. To access certain Red Cross programs, some people are required to meet with officials in person.

The Pictou office is located at 99 Water St. at the deCoste Center for Arts and Creativity. People in Pictou and neighboring counties won’t have to drive to Sydney or Dartmouth for help.

Dan Bedell, spokesman for the Red Cross in the Atlantic region, said the Pictou office will be open as long as needed.

“A lot of people are still getting back up and running after power is restored and dealing with other issues, so not everyone has even had a chance to apply for some of these programs yet,” he said.

The province has announced programs aimed at the agricultural and forestry industries.

For the agriculture sector, this includes a one-time grant of $2,500 that will be automatically sent to registered farms in central, northern and eastern Nova Scotia that have experienced financial losses due to infrastructure or crop damage, loss of livestock or extended power outages due to the storm. .

Private tree plot owners who need help clearing trees that have been felled or left leaning, weakened or vulnerable because of Fiona can access funding of up to $3.45 million. He said a third-party organization will oversee the process and determine eligible amounts.

“This funding will help ensure felled trees that have been growing for decades don’t go to waste on the forest floor.”

Details of the province’s support packages can be found here.

In a news release Friday, Employment and Social Development Canada urged people who are unable to work because of Fiona to apply for employment insurance. The department said people can do this even if they don’t have an employment record.