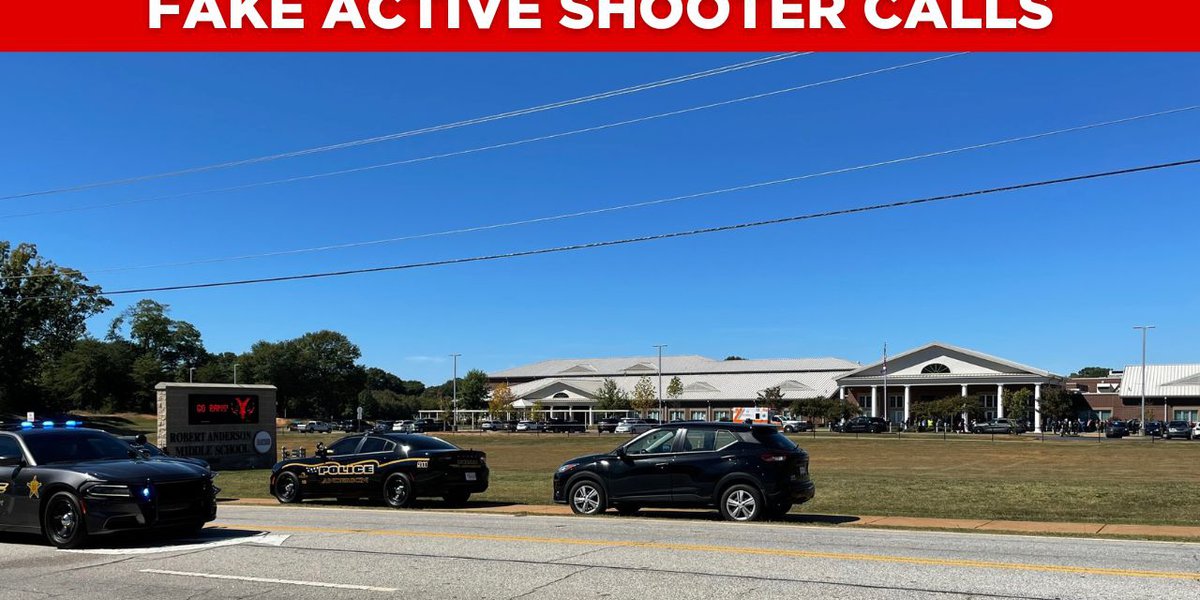 
GREENVILLE, SC (FOX Carolina) – State and federal agents are investigating after false active shooter calls were reported at more than a dozen South Carolina schools on Wednesday morning – and investigators believe that they could be from someone from another country.

The Greenville Police Department said a fake shooting was reported to Greenville High School, but a school resource officer was on the scene and did not report any shooting-related activity. Police responded to the school and confirmed there were no gunshots after searching the building.

“While today’s threat was a hoax, Greenville County Schools take all reports of this nature seriously and respond in full,” district spokesman Tim Waller said.

Additional law enforcement will be on campus at Greenville High for the remainder of the day as a precaution.

It was just one of many false threats reported across the state.

Governor Henry McMaster addressed the incidents while in Greenville on Wednesday for a manufacturing event saying, “It’s just ridiculous and it’s a crime.”

“I am advised by law enforcement that these are not legitimate calls,” McMaster said. “I hope they find who is doing this, I hope this kind of behavior stops immediately.”

Police respond to fake call for a shot at Greenville High

A similar fake shooter call was also reported about Robert Anderson Collegebut the Anderson County Sheriff’s Office said there was no threat.

“Whenever there is a perceived threat in any of our schools, we will respond as if our own children are there,” an agency spokesperson said.

A viewer shared a photo of a large crowd of parents at Robert Anderson Middle trying to pick up their children after the roll call.

“It was a nice relief to know it was a fake phone call,” Randolph said. “And it’s even better knowing you can hold your babies and bring them home.”

Anderson County Sheriff Chad McBride said deputies treated the threat as if it were real until they cleared the entire building. He called it a “ridiculous amount of wasted time and effort”, but said everyone was determined to protect the children at Robert Anderson Middle School.

“But I can tell you, whether it’s fake or not or a hoax or not, we’re still going to respond,” McBride said. “I hope parents know this, especially in Anderson County: You will never see a response like the one we saw in Uvalde, Texas. It’s something you’ll never see.

He also had strong words for the person responsible for the hoax.

Anderson County Sheriff Chad McBride had strong words for whoever is behind a string of reported false active shooter calls at SC schools.

The Laurens Police Department received an unsubstantiated call about an active shooter in Laurens High School. Police said they quickly determined there was no active threat and checked all schools within the city limits as a precaution.

The Oconee County School District said police received a prank call about a shooting at one of the district’s schools on Wednesday afternoon. The district said additional personnel and law enforcement will remain on site for the remainder of the day.

School District 7 in Spartanburg said a fake fire call was also made about Spartanburg High School.

In total, false calls for fire were reported Wednesday in at least 15 districts in South Carolina, including the following counties:

Richland County officials said the incidents appear to have stemmed from a challenge on TikTok.

The South Carolina Law Enforcement Division said it was assessing the credibility of the threats and, while it believes it was a hoax, each jurisdiction is encouraged to take the threats seriously. serious.

SLED said it is actively working with federal law enforcement partners on the investigation.

The governor said Mark Keel, the chief of South Carolina’s law enforcement division, said the calls were about the same and allege a child was shot or someone was killed in a school.

“They think that voice or transmission is from another country,” McMaster said. “It’s a foreign voice…and they think it’s all a hoax.

Governor Henry McMaster is releasing new details about a series of scam calls reporting false active shooter situations at schools across the state.

McMaster said the incidents aren’t just isolated to South Carolina — similar situations have occurred in other states. The Federal Bureau of Investigation is also involved in the case.

“The FBI is aware of numerous swatting incidents in which a report of an active shooter at a school is made. Similar incidents have occurred recently across the country. The FBI takes swatting very seriously because it puts harm to innocent people. Although we have no information indicating a specific and credible threat, we will continue to work with our local, state and federal law enforcement partners to collect, share and act on the threat information as it comes to our attention. We urge the public to remain vigilant and report any suspicious activity and/or individuals to law enforcement immediately.”

Attorney General Alan Wilson tweeted that he was “disgusted” by the fake active shooter calls and said “the state will not treat them as jokes.”

Active shooter situations are taken extremely seriously by law enforcement. False statements are no joke, and prosecutors across the state won’t treat them like jokes.

I am disgusted by the many recent reports of fake active shooter situations in South Carolina schools.

Stay with FOX Carolina for updates on this developing story.