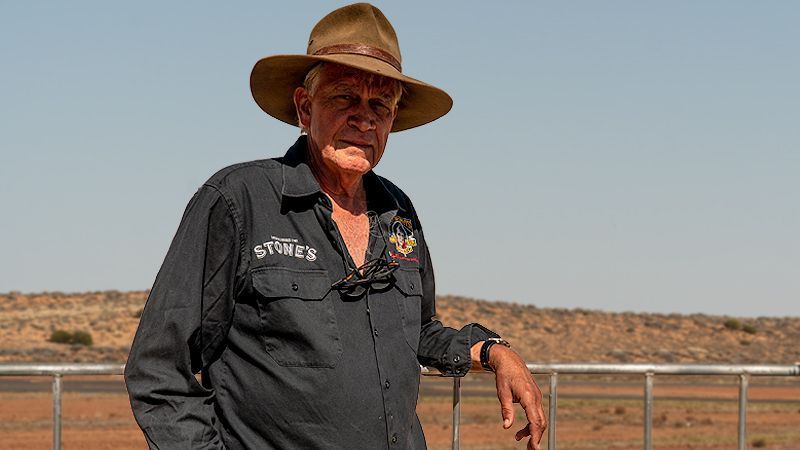 
BIRDSVILLE, Australia — A sea of ​​brown beer, rowdy people in flannel shirts and cowboy hats gather in the dark at Fred Brophy’s feet. The Australian icon is decked out in his usual red shirt, light blue jeans and brown boots as he crouches on a high platform and bangs a bass drum like his old self. He pauses for a moment before barking; “Who wants a fight!?” His legendary broadcast elicits wild cheers as one by one the over-ambitious punters, emboldened by their various levels of drunkenness, throw their hands to the sky and accept his challenge.

Each brave and aspiring boxer then climbs the rickety wooden ladder to join Brophy and answer a series of personal questions as the drum beats ever so slightly and the tension rises. This “rallying cry” is how every Brophy show starts, and when half a dozen volunteers show up, those left with $45 pour into his pots for a truly unique Australian experience.

Fred Brophy’s Boxing Band — a traveling circus that offers everyday Joes a chance to punch and kick, all in the name of entertainment — is the last remaining legitimate boxing tentpole in the world.

“We’re going to fight somebody,” Brophy told ESPN in his no-nonsense tone. “We don’t care who they are or what their reputation is. We don’t care if they’re pro or whatever.

“But if they do this cage fight … if it’s UHF or HIC; I’m calling them out,” he said, referring to the UFC, “If they do that to my guys, we’re going to take it back. them.”

Brophy has lived a life of hell.

Born in Perth to a trapeze artist mother and circus father, Brophy hustled for cash as long as he could stand on his own two feet. He developed a taste for violence at a young age, sparring with other local kids in his father and uncle’s boxing tent as he toured Queensland, a warm-up act for adult fights. He has been shot more than 100 times with a “double-barrelled rifle”, had spears thrown at him, had parts of his fingers cut off, failed to escape from prison, received an OAM (Order of Australia), and run several times. pubs, along with the famous mobile boxing tent, of course.

“This belongs to Australia,” Brophy says as he points to the red earth beneath his feet. “Tent Boxing is an Australian tradition. A show that celebrates everything Australian and I’m proud of it.

“Here you catch flies, dust, rain and wind. But you make a lot of friends for life. It’s a real 100% Australian experience.”

Every year, thousands of people travel to the Australian outback to watch the iconic ‘Melbourne Cup Outback’ race, which is run on a dirt track.

When you step into Brophy’s boxing tent, you might as well step into Dr. Emmett Brown’s DeLorean. It’s a throwback to a time in Australia when the term “political correctness” had no meaning. The men smoke and drink brown liquor, while the women are secularly referred to as “Sheilas”. For some, Brophy’s experience is a reminder of what the nation once was, while for others it’s a history lesson and highlights how far society has come.

WITH JOHNNY CASH “The Color of Fire” blaring thin, plastic, retro speakers, Brophy steps to the center of the battleboard and summons “Beaver.”

“He comes from King’s Cross, where the women are tough and the men are handsome. He’s got hair on his legs that would spear a rat, that’s how tough he is,” warns Brophy, a simple carpenter in his mid-20s from country New South Wales. After a few minutes from the Brophy Theater, the pair touch gloves and begin dancing in the ring. It starts very quietly but quickly turns into a brawl, with every punch thrown receiving a roar of approval from the capacity crowd.

Beaver, also known as Bretlin Neal, has been on Brophy’s roster for 12 years. He teams up with ‘Digger’, a six-foot-tall Army veteran, and ‘Chopsticks’, a Taiwanese expat, and lives up to Brophy’s motto “The boys are back from the Bush. We’ll fight anyone.” which is decorated on the outside of their bright green tent.

“In 2010, I was a security guard in Birdsville [Hotel] pub and I saw this amazing tent with lights and drums playing in front of it. I wanted to be a part of it,” Beaver told ESPN. “I went and raised my hand [to fight]. I drew one and then won one. The third night I came back and Fred said, “You’re fighting for me now.” I’ve been with him ever since.”

Beaver barely breaks a sweat while his opponent looks like he’s gone 12 rounds with Mike Tyson. He is in pain. Even wild encouragement from those around him can’t give him a second wind. Beaver faked before stunning him with a brutal right hook, earning his second knockdown in a matter of minutes. “That’s enough,” Brophy yells as he rushes to the deck to check on the well-being of the battered carpenter. With a thumbs up, Brophy raises Beaver’s left arm in triumph, the tent cheers again.

“I like to fight,” Beaver tells me. “They never win when they come in? If they hit you, then they’re a womanizer, and if you beat them, then they’re a p-nsy. But at the end of the day, we’re in this we’re here to give people an experience and make sure the crowd enjoys their night. It’s entertainment. It’s as simple as that.”

What makes someone want to be beaten and beaten, you ask? I decided to find out and asked the man who had just solved Beaver.

“It’s an experience,” he says. “When do you get a chance to do something like this again?” It turns out that for the few who managed to get an advantage over their more experienced competitors who are fighting for the tent, the cash prize of 30 dollars per minute can be saved.

Brophy’s tent roams the outskirts of Queensland, the only state or territory in Australia where it is still legal for outsiders to deal with semi-professionals. But once it’s banned there, it could spell the end of boxing camps around the world. Until that day comes, however, Brophy has no plans to retire.

“I’ll do it until I can’t climb that ladder,” he says. “And I won’t change for anyone.”